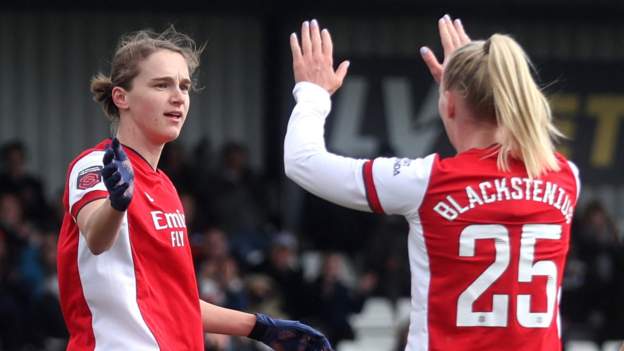 Rafaelle Souza had opened the scoring and Beth Mead put Arsenal 3-0 up.

Arsenal last won the WSL in 2019 and this result gives them a handy cushion over reigning champions Chelsea, although Emma Hayes’ side have three games in hand.

In Miedema, Arsenal have the league’s crowning talent and she oozed class throughout. Her 100 goal contributions comprise 70 goals and 30 assists since her arrival in 2017.

Her 10th goal of the season was more than Birmingham had scored in total in the WSL this season before the game.

Arsenal’s defeat by the Blues eight weeks ago was the shock result of the campaign, but it remains the only victory of a difficult season for Darren Carter’s team.

Although they struggled to create anything, they found some spirit in the last 15 minutes to punish defensive complacency from their hosts, Smith bundling home and Quinn threatening a spectacular comeback with a fine finish.

Jonas Eidevall’s side looked nervous as Birmingham hunted an unlikely point, but broke away and clinched the points as Foord fired home in stoppage time.

What is support? Types and importance