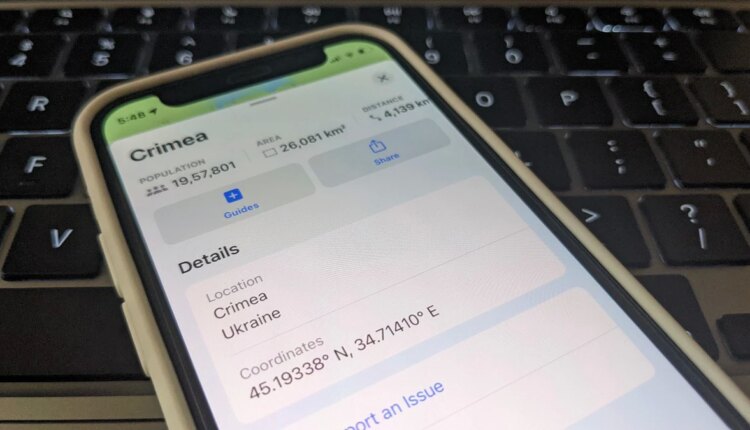 The pre-installed Apple Maps and Weather apps on Apple devices have started showing Crimea within Ukraine when viewing from outside Russia. The change appears to be a part of Apple’s ongoing efforts to cut its ties with the Russian Federation over its war against Ukraine.

In 2019, Apple complied with Moscow’s demands to start showing Crimea as a part of Russia when used in the country. The move was denounced by Ukraine at the time.

Apple also later clarified that it reviews domestic laws alongside international law and relevant US laws before making a determination in labelling its Maps.

As reported by Mashable, Apple is not bringing any changes to its users in Russia. The update is, however, in place for all Apple users in other countries.

Gadgets 360 has reached out to Apple for a comment on the change and will update this article when the company responds.

Unlike Apple, Google Maps is still showing Crimea as an independent region for users outside Russia.

The status of Crimea is disputed. The peninsula in Eastern Europe was seized by Russian troops and annexed by Moscow in March 2014. The move has since been criticised by Ukraine.

Earlier this week, Apple stopped sales of its devices including the iPhone in Russia to show support for Ukraine in the midst of the Russian invasion. The company also removed apps of Russian state media from the App Store in countries outside of Russia. Additionally, Apple Pay has been suspended in the country as a result of the sanctions imposed by the US government and European Union as well as the restrictions considered by the Central Bank of Russia.