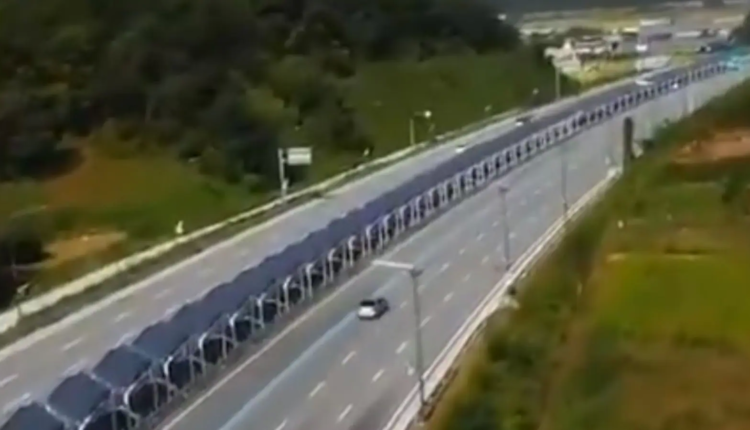 Anand Mahindra never fails to give a shoutout to ideas that challenge the prevailing paradigm and advocate a sustainable lifestyle. The Mahindra & Mahindra honcho has always been vocal about innovative solutions to modern problems and challenges. A recent piece of evidence of this trait surfaced when Mahindra’s attention was caught by a plan that was implemented in South Korea. Former Norwegian politician, Erik Solheim, shared a video that shows a bicycle lane running between two highways. The catch is that the bicycle lane is covered by solar panels, hitting two birds with one stone. One is that the solar panels provide shade to cyclists under the scorching sun, and the second is that it produces clean energy.

In South Korea 🇰🇷, the solar panels in the middle of the highway have a bicycle path underneath – cyclists are protected from the sun, isolated from traffic, and the country can produce clean energy. pic.twitter.com/ayNqUmdT0q

As soon as the idea reached Mahindra, the billionaire shared the video on his Twitter feed. “What an idea, Sirji,” Mahindra wrote. He added, “We have been doing similar things by covering the canal, but this would substantially increase coverage. It is worth looking at even if cyclists do not use expressways…and who knows, maybe it will kick off a recreational cycling boom.” Ending the caption, Mahindra tagged the Minister of Road Transport and Highways in India, Nitin Gadkari.

What an idea sirji… We have been doing similar things by covering canals, but this would substantially increase coverage. It’s worth looking at even if cyclists don’t use expressways…and who knows, maybe it’ll kick off a recreational cycling boom.. @nitin_gadkari https://t.co/zrZk8CqjFK— anand mahindra (@anandmahindra) March 2, 2022

Netizens poured their reactions, suggestions, and thoughts by commenting and retweeting the video, along with Mahindra’s tweet.

One user wrote about the adrenaline rush that kicked in after listening to this idea.

Adrenaline rush already started. This can be a perfect model. Would be delight for recreational cycling and would make it more popular. Brilliant thought. https://t.co/ZejAHg1ilh— Rajiva Singh (@Rajiva2011) March 4, 2022

Another called the idea “multi-beneficial.”

Very good logic sir, it is like multi beneficial, in view of benifits. We can can think lot more now, no end for idea’s to boom in innovative indian culture. https://t.co/dslV7Hvx2v— slskkumar ಸುರೇಂದ್ರ ಕುಮಾರ್ (@slskkumar) March 3, 2022

Many pointed out the challenges, including that of protecting the solar panels from getting damaged.

Keeping the panel safe and clean will be a challenge in our country. Dust and smoke gets immediately accumulated to impact efficiency or ROI. https://t.co/ayUzbj240T— Keerthi Bukinakere (@keerthibt) March 2, 2022

Many advocated the promotion of cycling.

This user shared pictures of the current installation of solar panels on canals that Mahindra pointed out as well.

The idea will definitely change the way we perceive the concepts of energy and transportation. What do you think?

Tinder Collaborates With Thai God Of Love, Singles Rush To This Bangkok Temple