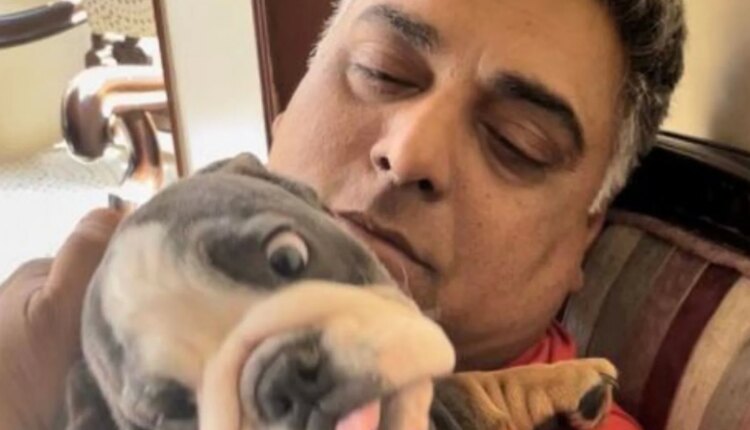 Ram Kapoor’s Instagram profile is full of snippets of his lovely dogs.

Ram Kapoor’s video showed a very adorable dog looking at the camera with its beautiful wide eyes. Chopper’s video will indeed leave you in awe.

Actor Ram Kapoor’s Instagram profile is flooded with his sensational physical transformation pictures and snippets of his lovely dogs. He often posts pictures, and videos of his dogs simply goofing around. Today, the case in point is a video that Ram shared and it features his pet pooch Chopper, who is very “hard” to discipline. In the post, the actor also explained the reason for the same. “It’s so hard to discipline him when he looks at me so cutely,” Ram Kapoor wrote while sharing the video. The clip showcased the very adorable doggo looking at the camera with its beautiful wide eyes. Chopper’s video will indeed leave you in awe.

In the clip, Ram is heard scolding his doggo for tearing his workout glove. While Chopper can be seen melting Ram’s heart with his beautiful wide eyes, the actor is certain that he will neither lift him nor talk to him. Since being shared, the clip has racked up over 28,000 views and the numbers are only increasing. The share has also prompted people to post various comments, including one from Ram’s wife Gautami Kapoor. She commented on the post, “He also wants to get into shape!!! Leave him alone.” One user commented: “Awww please hug him” while others simply adored the adorable dog. Ram and Gautami are pet parents to two dogs, Popeye and Chopper.

While Popeye has been a part of their family for quite some time, the couple welcomed Chopper last month. Ram had also shared a post welcoming Chopper. “This is ‘Chopper’ new addition to our family,” he captioned the image featuring him holding Chopper, and his wife standing next to him.

Ram has been pretty occupied with a bunch of OTT projects. He was last seen in Abhishek Bachchan-starrer The Big Bull. Last year in September, Ram made headlines when he shared pictures of his stunning transformation. Once termed as a plus-size star, Ram is currently one of the fittest actors in the TV industry.

Are The Mysteries of Stonehenge Finally Solved?